Why does my problem keep returning?

Why does my Social Anxiety problem keep returning?

When will I be able to be socially at ease?

When can I end this problem?

Watch the full video to learn my answers to these questions.

Want to Neutralize Your Shame And Fear Of Embarrassment just by tapping along? 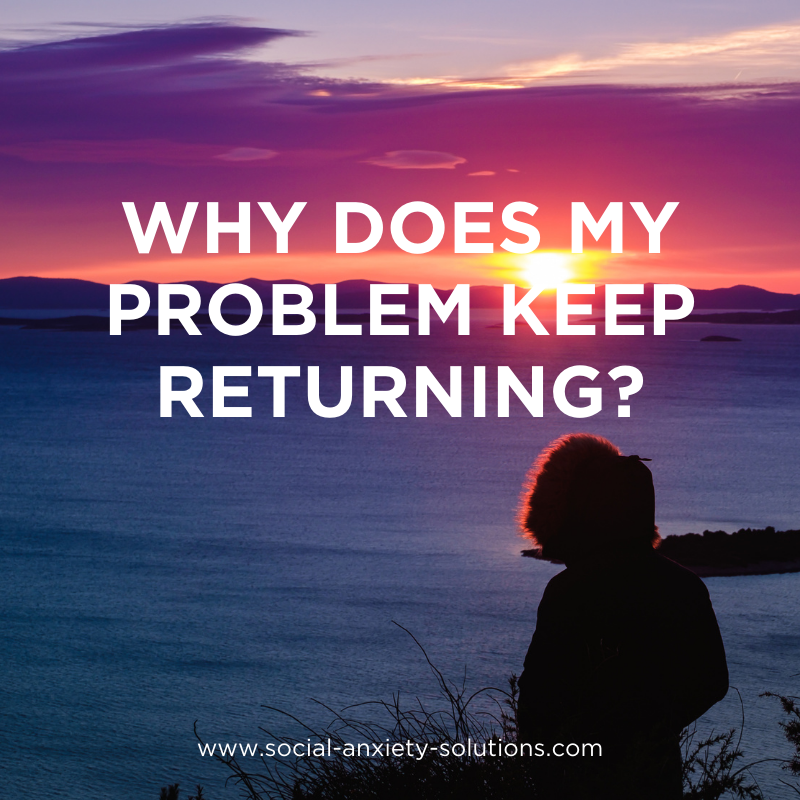 Why does my social anxiety issue keep coming back?

And I specialize in helping people overcome social anxiety by combining the best of traditional Psychology with Eastern Energy Psychology, of which the most well-known is EFT tapping.

So, people start learning about tapping, and then they start applying it to their social anxiety issues. And then, typically, what happens is you start making progress.

And those are all particular things, particular scenarios or situations or people that trigger anxiety within you.

Now, people typically have a “favorite” that’s not really the right word for it, but it’s the one that they obsess about most or where the problem is the worst.

For some people, the anxiety is the worst when they’re the center of attention.

For other people, it’s the worst when they are around attractive people.

For other people, etc., you know, keep going.

And so usually people start working on that particular issue, applying the tapping to that.

And they start to make some progress.

And they notice a little bit of progress. And then it goes well for a while, and then all of a sudden, the issue is back. Or so it seems. And they’re like, “Oh my God, will I ever overcome this?”, “What’s going on there?”.  “Why does this issue keep coming back?” “Why can’t I overcome this?”, “What’s the problem here?”, “Does tapping really work?”, “I’ve seen that I’ve made progress in these other areas. Why? What’s going on here?”

Well, what’s going on in this particular scenario is you simply have a sticking point. And this particular issue that you’re dealing with consists of a whole bunch of aspects.

I have a great example.

For me, facial blushing was a big problem. And it would keep coming back.

But actually, what was happening wasn’t that it was coming back, but I just couldn’t seem to get rid of it.

And it took me years. Not days, not weeks, not months — years to fully address it.

But what was happening was that the frequency with which I blushed was starting to decrease.

So, in the beginning, before I even started to do any tapping, I would blush pretty much every day, and it would happen out of the blue. And I couldn’t do anything (well, it wouldn’t happen out of the blue, there were a whole bunch of triggers for it). But what I’m trying to say is, I had no control over it. Someone would make a joke, and even though it wasn’t meant to be rude, or mean, or anything like that, I would blush; people would look in my direction, and all the attention was on me, and I would blush; people would ask me a question, “Sebastiaan, are you dating anyone? *boom*, I would blush; I would make an error, or I would lose my train of thought, I would blush, etc.

I had lots and lots of things that would trigger the blushing.

And as I start applying the tapping, less situations would start to trigger the blushing.

However, I also had a fear of blushing that I needed to deal with, and so on; and so forth.

But the reality was I was actually chipping away at the different layers of the problem. And I was working through one aspect after the other.

So, there were various aspects, smaller parts, that would trigger the shame.

And whenever the blushing would come back, it’s actually not that it came back. But it was another part of the problem that I hadn’t just hadn’t yet addressed, that I could then address.

So, it required a whole bunch of persistence in order to overcome it.

And there was another key moment for me, where the things that I’m now teaching, I’m able to teach because I had to go through it myself, and I learned it, I didn’t know for the most part, but for a large part, from my own journey, the other is from learning from other people and then observing it in my clients.

So that was another aspect, another part of the problem that I didn’t succeed in, so I didn’t succeed for a long time, in accepting the fact that I would blush. Because it was so unacceptable for me, I had so much judgment about it. And I needed to work through that to normalize it. And counter-intuitively, that actually made it go away.

So, acceptance was a big key there.

But the point I’m trying to make is, it took me years to clear it.

Now, it doesn’t have to take you years to clear your particular social anxiety issue, though it might very well, who knows. Even if it does, it’s worth it.

Because of all the work that you’re doing, you’re making progress. And that’s what you’re looking for –  feeling better, a little bit of relief, making a little bit of improvement, feeling a little bit calmer here, having a little bit more ease there, feeling a bit better about yourself, not beating yourself up so much, being automatically more optimistic without having to force yourself to think positive thoughts. That doesn’t work anyway. Though, you do want to be realistically optimistic—story for a different video.

But in conclusion, when it “comes back,” it’s not that it’s coming back. It’s simply whatever is left that still needs to be addressed.

So, you then need to address it.

And if you cannot address it or don’t know how to go about it, that’s when you’re going to need some outside help because some of your issues, you’re blind to them yourself. In psychology land, this is called the subconscious blind spot, Google it, and you’ll find out what it is.

And for certain issues, you need to work with a therapist because you don’t feel safe enough to go where you need to go in order to resolve that particular issue.

However, the mindset, which is based on reality, not on optimistic thinking, the reality, the mindset is, “okay, I’m getting triggered, again, doesn’t mean it’s back. It means whatever is left, I now need to address, and this is a healing opportunity. Because as I now chip away at another layer of the problem, it becomes even a smaller problem in my life, it becomes even a problem that shows up less often in my life”.

If you have a problem with facial blushing, by the way, since I’ve been talking about it so much in this video, I actually have a replay of a coaching series that I did with a lady named Leah, with a lot of shame and fear of embarrassing herself, and we do a coaching series, where I coach her over four live webinars, those are 90 minutes each.

And what you do is you simply watch that, and you tap along with it. And as you do, you start decreasing your issues with shame. You start getting rid of that fear of embarrassing yourself.

It’s really amazing. You do that just by watching and tapping along.

Now, it probably won’t resolve your whole shame issue, but it’s very likely going to reduce it, and that’s going to make your life quality a lot better.

If you’re interested in that, you can go to bit.ly/fearofembarrassment

Alright, I hope this has been helpful. Leave a comment below or put your question below, and I’ll get back to you.

Alright, have a good one. I’ll connect with you very soon. Bye for now. 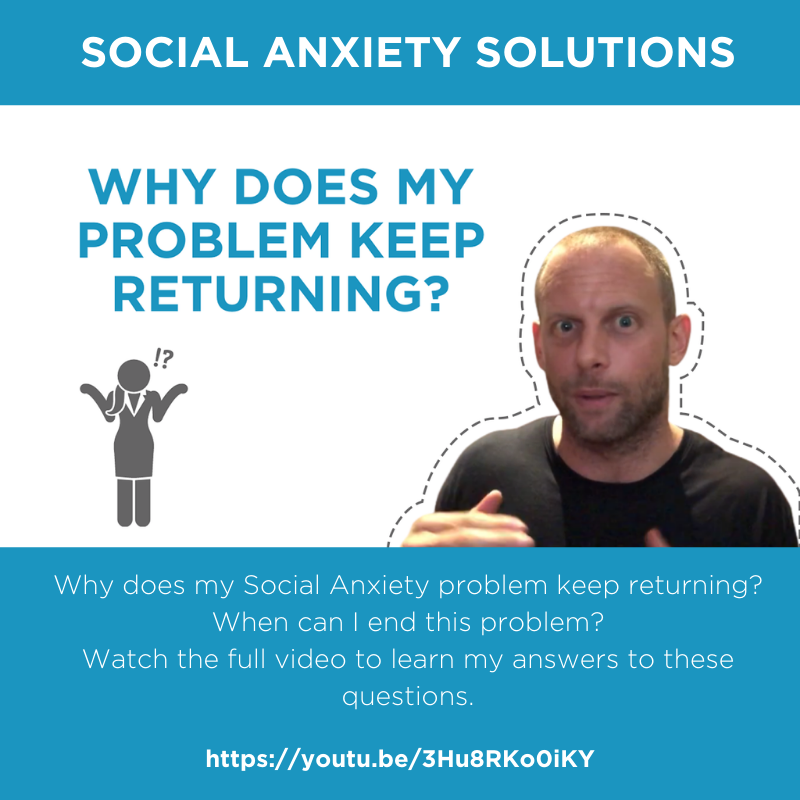 Join me
Latest posts by Sebastiaan (see all)
Previous post Is SMALL TALK Causing Social Anxiety? Next post 6 months to reduce your Social Anxiety by 50%…can you do it?
Social Anxiety Solutions © 2019 All Rights Reserved.