“I’m SA free but don’t have a social life”

In this episode, Sebastiaan gave 3 practical tips that you can do to break away from your “I don’t have social life” identity.

If you want to learn more about your inner psychology and be inspired about the powerful transformation you can make, go to our podcast at https://podcasts.apple.com/us/podcast/social-anxiety-solutions-your-journey-to-social-confidence/id991383481 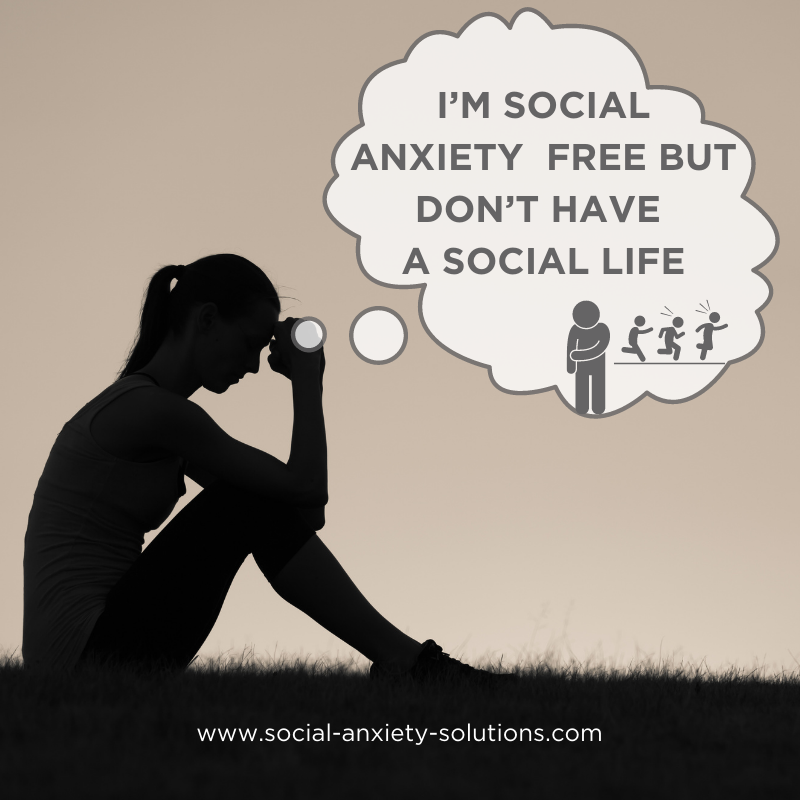 That’s pretty much the statement interwoven within the question that was sent to me. And I’m going to answer or give some tips on what to do.

My name is Sebastiaan from www.social-anxiety-solutions.com. I’m former Social Anxiety Disorder sufferer. And I picked this question out of the list of the questions that I have because the guy is writing about how he’s in lockdown – and I’m in lockdown now at this moment. Not for long, because I’m going to leave, but I’m in lockdown now. So I can relate.

So here he goes:

I am struggling a little bit with my identity (I think). During covid especially and while in San Diego, I have developed this identity and a habit of not really putting myself in too many social situations, and sitting in the house during the week, and sometimes hanging out with friends during the weekend.

Part of it may be fear, but I believe it’s an identity I formed. Do you have any tips for how I could break away from this?

I think what would help me would be to schedule some time each week doing something that forces me to get into a social situation. All this should be easier if everything is almost fully opened back up here.

Any advice would be great.

Fantastic question. And the situation I found myself in a fair bit.

So speaking from lots of experience, here we go.

First of all, why do I speak that I have lots of experience?

I lived in different countries. And often, I would go to a new country not knowing anyone. And even though I wouldn’t have any social anxiety anymore. I still need to go to start from scratch, making friends, and so on.

Basically, let’s get into the three tips.

I’m going to start with the practical tips first. And I’ll talk about the inner world, inner psychology shifting that around tips best for last night.

In the past, I tried a variety of things.

I thought that I was interested in networking and meeting people from business, marketing, and so on, and meetup.com and stuff like that. It turns out I’m not interested in that either.

I thought that (well, this was with my girlfriend at the time, it was rather, she had a good idea. And I kind of follow along) it was going to be fun to do game nights. So meetup.com game nights, we just moved to Korea at the time, two of us. And she thought that it was a great idea to meet new people. I was okay, but I’m not really into games, and so on and so forth.

Certain things I tried that didn’t work out really well was…I like working out. So when I lived in Chiang Mai, I joined a Chiang Mai fitness group. And at that time, I was still waking up at the extremely early time of 5:45 [in the morning] to make it to the 6 am workout.

Now that was me, and maybe 12 – 14 people that would work out every 6 am at the stadium in Chiang Mai. And that was great! And that builds some friendships. And some of them I’m not really in touch with daily or anything but every now and then if they happen to be here, or I happen to be where they are, we cross paths, and we meet up!

But when we’re living in the same place that led to, ‘Okay, well, we’ve worked out together now, we’ve sweated, we’ve gone through some emotional up and downs, because it’s a hard workout and it’s 6:00 in the morning, and now we feel great. So, hey, what are you doing later? Or, hey, I’m going for a Slurpee, like a green juice, or you want to join? Yeah, great.’

You get invited. That’s what you’re looking for.

It has built-in conversation because it’s something that you’re interested in and so on.

So look for something that you’re interested in now for me eventually. Not really that into working out. I’m especially not really into getting up at 5:45 in the morning, because nowadays I wake up at nine o’clock in the morning, so that doesn’t really suit me.

Eventually, I found salsa dancing, and that became my absolute passion. And that was something fantastic because I love going to salsa dancing, I love learning about it, I love the vibe, I love the music, It’s interesting to meet new people, It’s easy to dance with new women. It’s just “want to dance?” – you already have a connection, easy to talk, easy to communicate, to socialize wherever you go in the world because there are these communities all over the world. There’s an ongoing path of mastery in growing your skills as a dancer. There’s the the sense of connection that you get from it. People appreciate other dancers. This is like, “this is my gang! This is my tribe”.

So after trying a whole bunch of different communities and things that I’ve done had some interest in entrepreneur meetups, Movie Night, I organized a bunch of them myself, I like to put a face, but that’s what you can do as well. I organized like a documentary night in Chiang Mai, where we’d all come together and watch some documentaries — I’m not really that into documentaries, turns out, because I only organized it once or twice, and then it was over.

The group is still alive, actually.

So these kinds of things, look for something that you’re interested in, go do it. So that’s number one.

Tip number two is: Be consistent.

So if you show up the first time, it’s a whole bunch of new people. You don’t know them. Especially if you’re not super comfortable, that might be a bit intimidating.

It’s alright if you don’t feel totally comfortable there. And so your first time is not going to be your best time, which applies in other areas of life as well. But we’re not going to go there.

Anyway. So what you want to do is you just want to show up again and again. And again. And maybe the second time, you’ll feel a little bit more comfortable.

The first time, maybe you just smile a little bit and maybe say hi, introduce yourself, or you know, they asked you who you are, whatever your brief conversation. The second time, you’re a bit more comfortable. And they’re like, oh, there’s that guy again, or girl again? I’m a guy, right?

So the third time now, you start to feel a bit more comfortable.

Fourth, fifth time now you start to be this new guy. And then some social people might come over to you. Hey, man, I’ve seen you around blah, blah, how’s it going? What’s your name? And you start a conversation, and it’s easy to have a conversation also, because you have things in common.

So in the dance community, I see new people like, ‘Hey, man, how’s it going? My name is Sebastiaan, how are you? Yeah. Great. So have you been dancing a long time?’ – Super standard question or what do you dance salsa? Bachata? Or Kizomba?

This, okay, what’s your favorite dance? Stupid, social, little, small talk conversations that are very appropriate to the thing that you’re interested in.

They exist within every different community. And it’s normal. And it’s standard, everyone expects it, it’s totally fine. People like it. It breaks the ice.

It’s a comfortable way to kind of get past these first initial minutes until you find an interesting conversation topic. If you vibe with that person or not, then it’s like — great, well met, that person we know has a little bit of vibe, but not too much…moving on.

So one doing something you love, two consistently showing up there.

And then number three, it’s very straightforward, but be friendly.

So even though you go that first time, you’re a bit uncomfortable…

…smile, be nice, have a little twinkle in your eyes, be friendly, just like common sense stuff.

But if you don’t feel totally comfortable, I’ve noticed in the past for myself that I can have a bit of this closed-off face. And I’ve seen lots of other people as well. It’s like ‘I’m too cool for school’. I’m this cool guy or school girl, which shows up here.

Ease up on that. Be friendly, be nice, smile, that. And if you have a sense of humor, even better, right, but you know, that’s it.

So those three simple tips, do something you love, show up consistently and be friendly.

Doing that is going to get the ball rolling for you.

So how you’re going to start?

Now, these are some great practical tips that you can take. But the problem is, it’s very difficult to do this. It’s still very challenging to do this because you’ve got your subconscious that’s not on board with that.

And so, you want to get your subconscious to be a YES to that. That way, change is going to be easy, and you’re going to easily be consistent and moving in that direction.

And to get yourself to take that action and to have it be easy, I’m going to share with you three inner psychology tapping tips that you can do that are very easy to do, and you’ll get results just like that.

But this video is getting too long. So we’re going to do that next week.

So tune in for the next video. This is Sebastiaan from social-anxiety-solutions.com 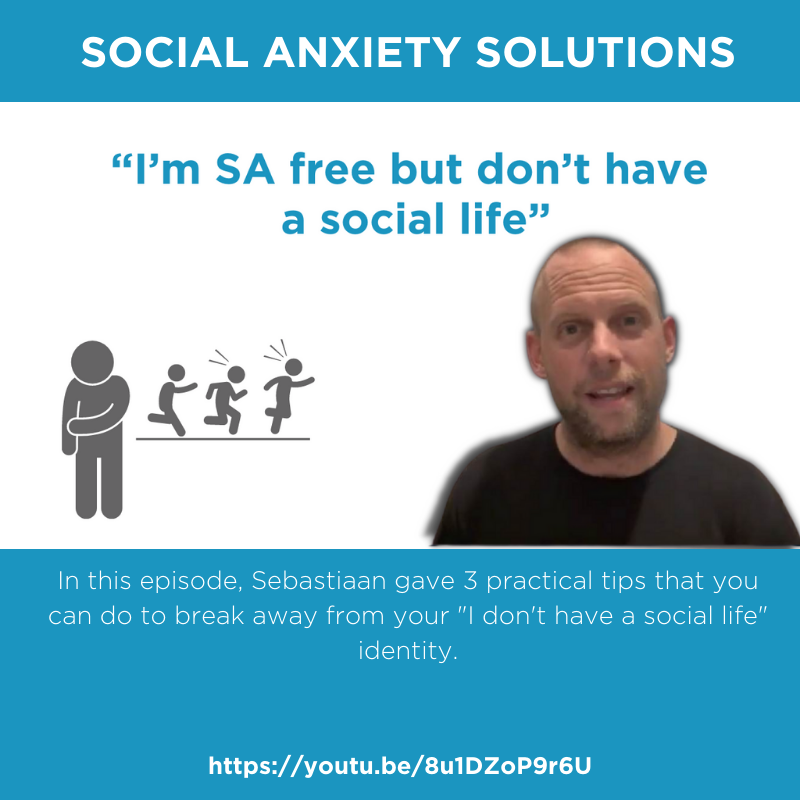