How to Stop Comparing Yourself With Others

“Why is that person okay with everything?”

These statements are what socially anxious person thinks about whenever they compare themselves to others.

In this episode, I will be sharing with you empowering perspectives to help you feel okay and at ease with yourself. 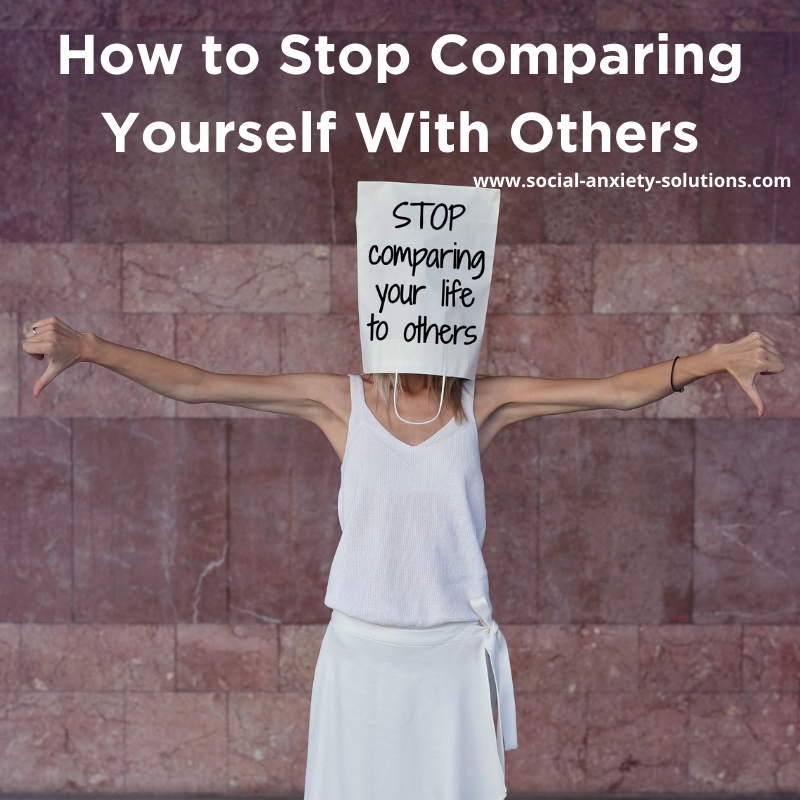 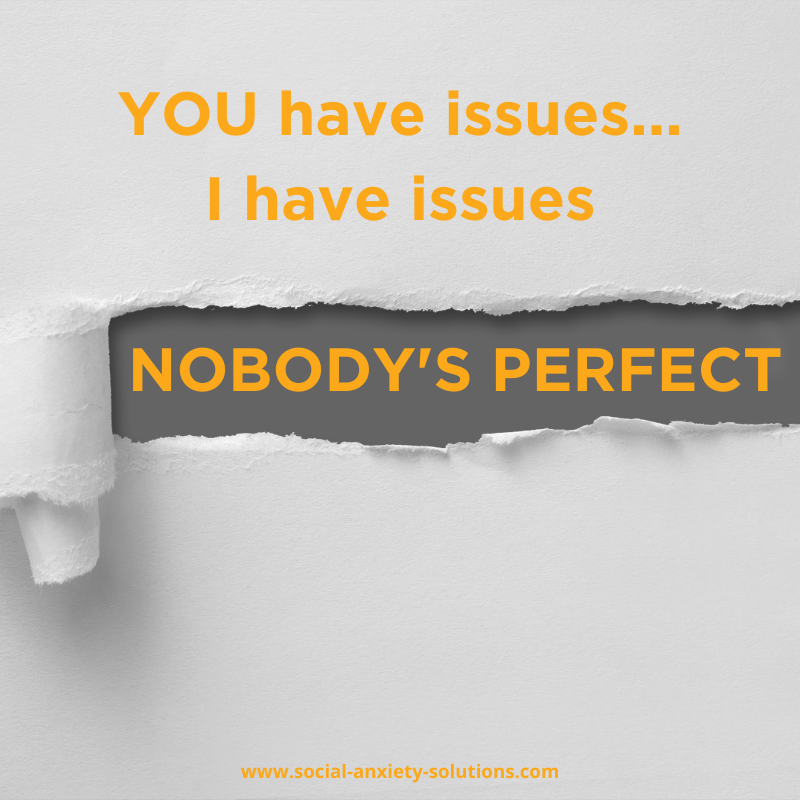 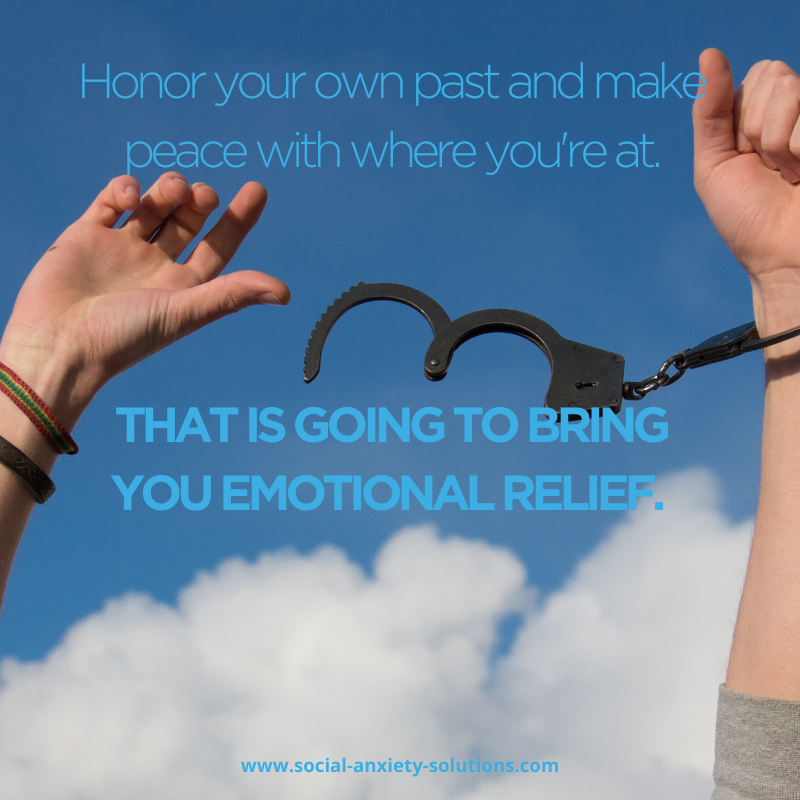 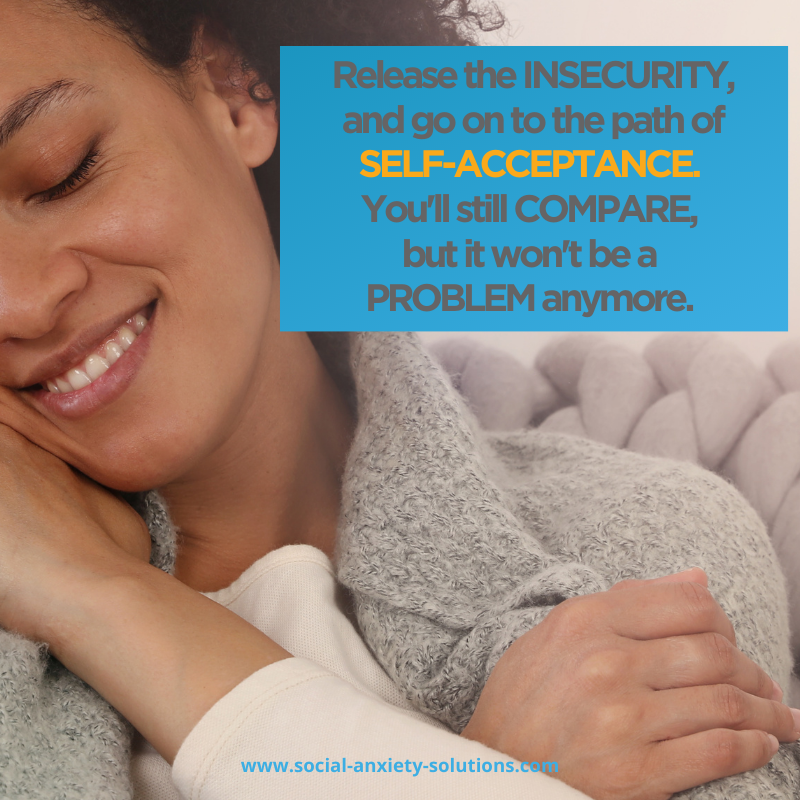 Are you tired of feeling like shit, because you’re comparing yourself to others?

Well, then you’re not alone.

And in this video, I’m going to do exactly what the title suggests.

I’m going to teach you how to stop comparing yourself with others.

And I’m not just going to give you ways to change your thinking.

Though, I’m also going to do that.

I’m actually going to guide you through a Powerful Emotional Release exercise to shift this pesky mind habit. So that you can be more in the moment, to be present with yourself, and actually really enjoy being around others.

Hello, my name is Sebastiaan Van Der Schrier. I’m a former Social Anxiety Disorder Sufferer and a Social Confidence Coach. And I specialize in combining Traditional Psychology with Eastern Energy Psychology to help people feel calm, relaxed, and at ease in social situations.

Now I have a long history of comparing myself with others. I used to be (I’m 36 now) a good soccer player. I’m still good, but not top speed anymore. And I used to be the best in my team, or at least according to myself. And I was always comparing myself with when we played against another team, and there would be a player that was on the verge of being better than me. Of course, never, never better than me. That would make me want to prove myself and it made me feel insecure.

If I had friends around me that we’re more confident than me, it made me feel insecure.

When I turned 15 or 16, and guys and girls started dating, getting girlfriends, and so on, and I was not, I was now comparing myself to that. And that made me incredibly ashamed and just embarrassed about myself that I wasn’t having that.

Then, when my Social Anxiety was really bad, this pattern was just all over the place. Like, I’d be like “that guy is funnier than me”, “she’s more intelligent than me”, “I’m not speaking enough here”, “I’m too quiet here”, “he speaks more”, “she’s so free and in the moment“. I’ve had few feelings of jealousy and envy and so on. And so it was a real pesky problem. And it was difficult, all the way into my 20s. And it required a lot of work to overcome this, actually.

But it was actually more an emotional journey. So I had to address the root of this problem of comparing myself with others, and that root was actually emotional.

It had to do with insecurity within myself, not feeling good enough about who I was, and being embarrassed about myself, and so on. That needed to be addressed. And so, I addressed using EFT tapping, and I had the help of my brilliant coach in me going through that journey.

Now, I was kind of a pretty messed up case, if you will. And so for me, it was really a journey of discovering who it is that I really am uniquely, what my values are, what’s important to me, what I stand for, and what I don’t stand for, and being congruent with that? It involved, shifting insecurities that I had, and not feeling good about myself, and coming to a place where I actually feel worthy just for being me. Not because I’ve achieved X or done Y, or because I’m better than this person, and so on.

NO. Just feeling worthy because of me. And being okay with where it is that I was in life because it’s always shifting and changing. And really believing that I have my own path to walk. And other people are same, same, but different. They’re similar but they also have issues, they also have concerns. They also have dreads, and nobody lives a perfect life. But we’re all kind of unique.

And liking myself, you know, I have to get rid of disliking parts of myself. And the work involved for a large part, liking my unique self, so much so that other people, and not in the sense that well, I am better than you. Because that’s what it was for a while as well, which is actually part of the problem. But, I’m unique, you’re unique. And I like myself, I’m okay with myself. So it was really a journey of self-acceptance.

Now for me, this has been quite a path that has taken me years.

For you, I don’t know what is the case, because, for some people, it actually can shift really quickly. Whether that is the case for you, time will tell.

I’ll guide you through a particular exercise in just a bit. And that can be very significant for quite a lot of people. So maybe it will be very profound for you as well, at the very least is going to bring you some relief.

But if you are one of the people for whom it’s going to take a journey to get to this place where you’re not comparing yourself anymore, and you’re indifferent to what other people think – it’s so worth it! It is so worth it.

Think about it. Changing that is something that you then benefit from for the rest of your life because you have this problem show up whenever you’re around people. Well in your life, you’re always dealing with people. In your career, in your love life, in your friendships, and so on.

So this work, being able to be yourself, feeling liberated, being at ease, connecting with people effortlessly, and being present with people, and just feeling good about you, and feeling good about other people. That’s really worth it. So it’s really worth the work regardless of how long it’s going to take. Even if it takes you your whole life. Any kind of improvement in this area is going to be very, very helpful. So just wanted to give you that.

Now, before we get into some of the actual emotional release work, some of the tapping, I want to share with you 3 empowering perspectives or mindsets to set the stage.

1. The perfection you assume in others isn’t reality.

Now when you do this whole comparing thing, we tend to idealize other people, we tend to think, “ah!other people don’t have any problems”, “they’re perfect”, “they don’t have any issues”, and we assume perfection, which is crazy because it’s totally unrealistic. And the time in which we live with Instagram and Facebook and, and that, that really facilitates those kinds of assumptions of perfection.

Because what’s the reality?

Well, people put photoshopped pictures of the best moments of their lives on Facebook. And you know what? When I used to live in the Philippines, my girlfriend at the time, her name was Amy, I remember how she would take pictures of everything we’ve been doing, she just loved the camera that she had, and loved documenting everything. And when she was in a bad mood, she would start putting those pictures up on the web.

So, think about that, that would make her feel better because now people would like it. And you would have things to comment on, and so on. And it’s not always what it looks like.

People putting up these perfectly looking pictures of their face, they’ve taken like a thousand selfies in order to get to that one. It is not realistic.

Remember that what people post on Facebook is only a fraction, only a tiny bit of their whole life.

So you do not know what is actually going on in their life. It’s a snapshot.

They could be miserable taking that snapshot. Pretend to be happy for a second, and smile!

Get that into your head.

And you have your own idea of what success looks like for you. And I’m talking very broad with success and not talking money and career though. That’s obviously what it also is, but you might not blossom, whatever that means, until you’re, I don’t know 40, Whatever.

Samuel L. Jackson, he broke through at age 46.

Charles Darwin, who wrote the origin of species, age 50 is when he broke through

Susan Boyle, that lady with the amazing voice, 47

Ray Kroc, the founder of McDonald’s 52.

And you want to honor your own past and make peace with where you’re at, that’s going to bring you so much emotional relief.

Now, it’s easier said than done. This is just logical advice. But we’re going to do some tapping later to help you get to that place emotionally.

3. It’s common to compare yourself.

Now, we also just want to normalize the pattern a little bit, because everyone does it. And it’s just how we get an understanding of who we are and what we’re good at, and what we’re not so good at. It’s a normal pattern.

It just becomes a problem when your whole sense of self and your level of self-esteem is involved with it. But, when you address all of that, and you release the insecurity, and you go on to that path of self-acceptance that I spoke about earlier, then you’ll still compare, but it won’t be a problem anymore.

So for example, I’m a passionate salsa dancer. I started two and a half years ago, but dancing every single day. And I’m at a certain level. I’m not great, but I’m pretty good now. So now when I go out, yesterday for example, I look at the salsa teacher, and I watch how he’s dancing. And I’m comparing his dance with my dance.

So I can appreciate his skill level, his refinement, his sensitivity, how he ingeniously alters his body to make certain moves, how he hits the notes, and like, I appreciate watching it now. Whereas before, when I still had that insecurity, I didn’t achieve that level of self-acceptance yet, that would be jealousy, I’d be talking him down in my head, I’d be talking myself up in my head and make me feel all insecure and embarrassed, and I would not want to be there anymore. And that’s gone.

That’s not there anymore.

So, it’s normal to do that comparison. And you can get to a place where actually comparing yourself with other people can become something that inspires you. Okay?

But since YouTube doesn’t like long videos, we’re splitting that into 2. So make sure you go to this next video somewhere here, and I’ll guide you through that exercise.

Alright, so see you in the next video. Go there right now. 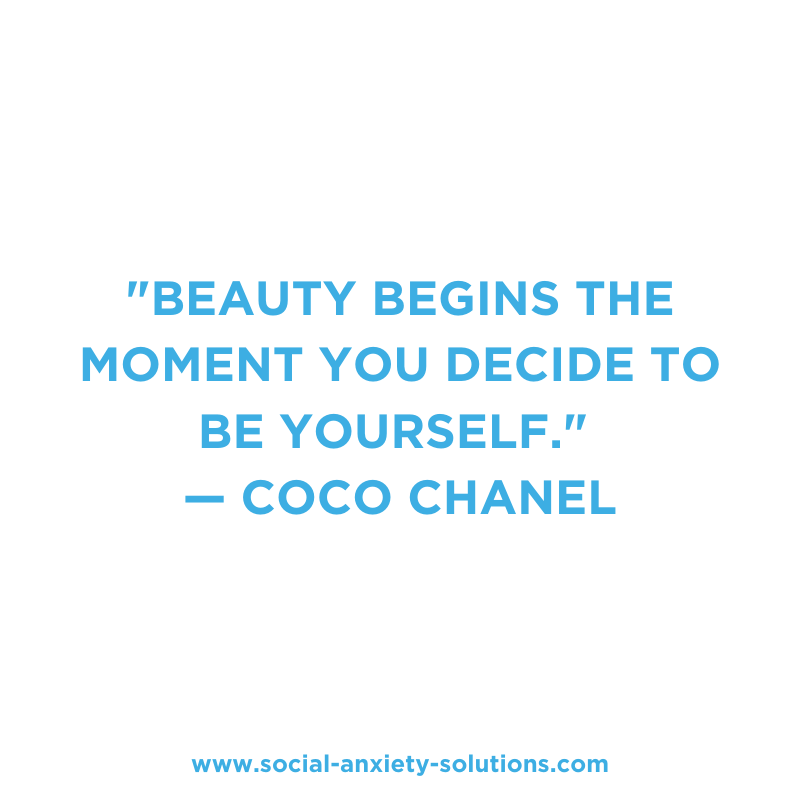 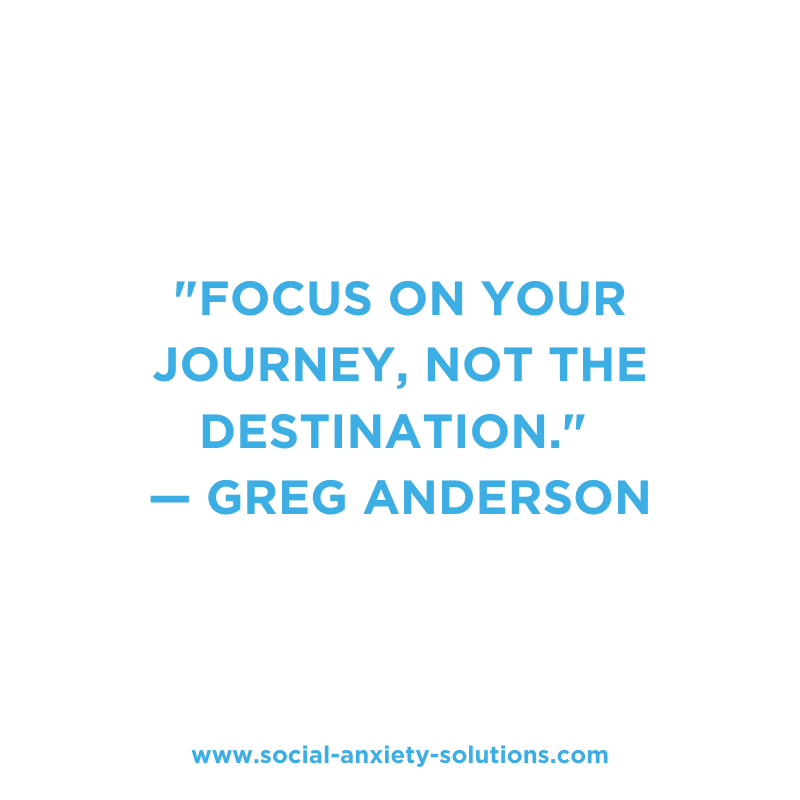 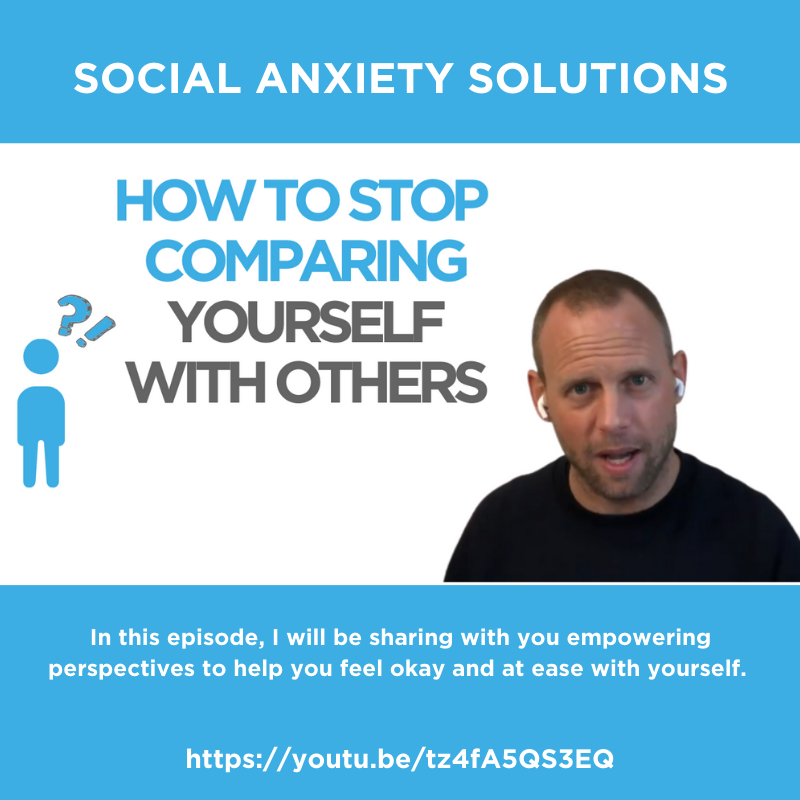 Join me
Latest posts by Sebastiaan (see all)
Previous post Soothing Words of Wisdom To Ease Your Social Anxiety Suffering Next post How to Stop Comparing Yourself with Others [EFT Tap-along]
Social Anxiety Solutions © 2019 All Rights Reserved.