Do you feel… ‘different’?

Have you been feeling different because of your Social Anxiety?

In this episode, tap along with Sebastiaan on the belief that you are different because of Social Anxiety. 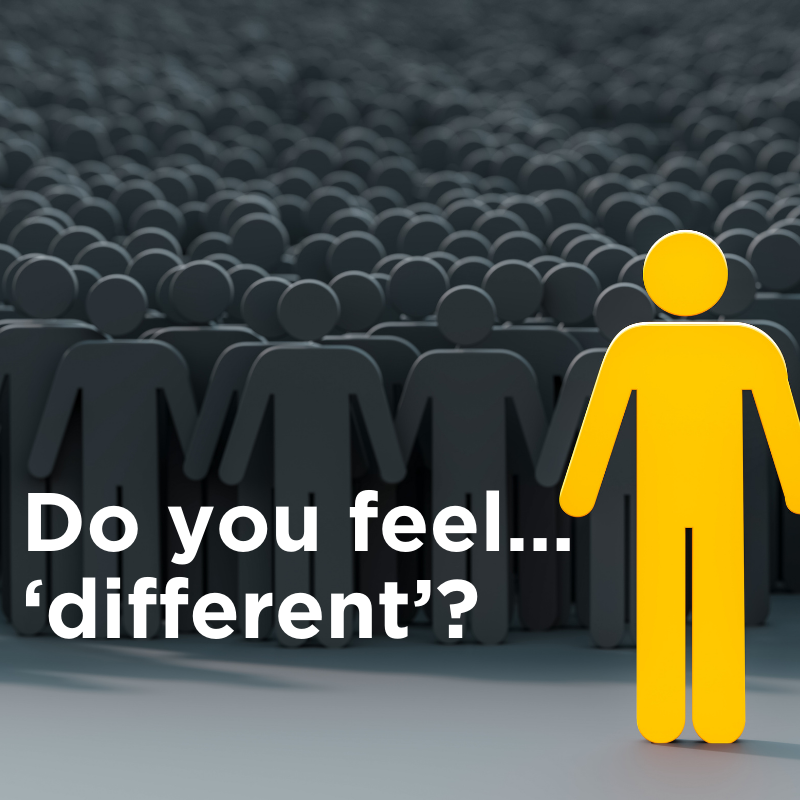 Do you feel different from other people and do you feel bad about that?

Let’s do something about that.

Hey! This is Sebastiaan from social-anxiety-solutions.com.

I run a Social Confidence Club. And inside that club, we do group coaching every Sunday.

And there, I help them with tapping to overcome their issues and I usually work with a volunteer or a variety of volunteers.

Last Sunday, we had a volunteer, and she was talking about how she felt different from other people and that she didn’t fit in.

And I asked the group, “Hey, by show of hands” and we have about maybe 60% of the people are actually visible on screen yet a 40% is there, but they’re anonymous, but you can raise your hand in Zoom as well.

And then I’m like, “By a show of hands, who is dealing with that as well, who can relate to that – feeling different and feeling bad about it?”

All the hands went up.

Okay, well, we then worked on that. And we did some tapping with my volunteer, checking with the people afterwards – how they were feeling as they were tapping along.

They got some relief as well.

And so, I want to do a little bit of tapping with you on that topic.

So just start tapping on the beginning of your eyebrows, and just keep tapping from point to point in random order, as I just talk a little bit.

Under the nose: Okay, so there is
Chin: the feeling of
Collarbone: I am different.
Liver point: And that can be I’m different because I am a bit eccentric.

Wrist point: I am interested in different kinds of topics
Top of the head: than most people are.
Side of the eye: Or I have different values than most other people have.

Under the eye: And you can feel different in that way.

Under the nose: And you can also feel different because,
Chin: well, I’ve got this anxiety issue
Collarbone: and I’ve been behaving differently.

Under the arm: Whenever I get the center of attention, I freeze-up
Wrist point: and I’ve just been acting weird.

Side of the eye: Yeah, so I’m different in that way. That’s another way you can feel different and feel bad about that; two different ways.

Under the eye: And while we tap,
Chin: so while you continuously tap,
Collarbone: I just want to say a little bit
Under the arm: about each.

Wrist point: So first of all, I’m very different.

Beginning of the eyebrow: I don’t live your typical lifestyle.
Side of the eye: And even though I no longer have this Social Anxiety issue already for a long time,
Under the eye: and I feel comfortable and at ease, and
Under the nose: I enjoy socializing, and so on.
Collarbone: guess what… not everyone loves me.

Side of the eye: But what that also means is like, “I don’t fit in everywhere?” Right?

Under the eye: So there are certain people that
Under the nose: I really, really like.

Chin: And guess what… typically, those people that I really, really, like…

… really, really like me! So we have a particular vibe.

Under the arm: But that’s not that
Wrist point: many people.

Top of the head: Now I can get along with pretty much anyone.

Beginning of the eyebrow: But really fitting in,
Side of the eye: like my people, my crowd.

I’ve traveled all over the world,

Under the nose: And I’ve got a handful
Chin: of close friends.

Collarbone: Only a handful of close friends.

Under the arm: And I am Mr. Social.

Under the eye: That’s a problem in thinking. So I first want to correct that. Alright?
You might just be a bit like me, in the sense that you’re a bit more picky about who you get
Under the nose: along with, or you have a stronger preference for particular kinds of
Chin: people.

Collarbone: And you don’t feel you fit in with everyone – that’s okay!

Under the arm: Make that okay.

Top of the head: That doesn’t mean that you can feel at ease around people and feel part of the gang.

Beginning of the eyebrow: So I’ll give you an example.

Under the nose: But that doesn’t mean that
Chin: with all of them,
Collarbone: I want to spend [time], hang out every week or every day.

Under the arm: No, it’s not like that. Some people, yes, I have a clique with.

With them, I go for lunch.

With them, I work out.

Collarbone: With them, we spend quality time together.

Okay, but it’s not everyone. So get it out of your head that you have to fit in with everyone all the time.

Collarbone: That’s one of these exaggerations that doesn’t serve you.

Side of the eye: Alright, good. Then, I want to say something about the “I am different because I have Social Anxiety.”

Wrist point: And if you’re dealing with severe Social Anxiety, which is probably why you’re watching this video,
Top of the head: then
Side of the eye: there’s a reason for that, okay?

You’ve dealt with trauma in your past, either developmental trauma (repetitive negative experiences early in childhood)
Under the eye: or significant emotional experience (specific traumas)
Chin: maybe both, likely both.

Collarbone: And so what happens socially is, your brain is perceiving that this situation isn’t safe for you – you might get rejected just like when you were in childhood.

And so your brain is warning you: “Careful, [there is a] danger! – this situation is just like the one in the past. And you might get that emotional pain again.”

And so now your heart is racing, there’s a lump in your throat, your mind blanks, or your thoughts are racing.

And when all of that is happening, you can’t socialize because your system is in survival mode.

And YES, you then act different.

Side of the eye: You might act pretty damn weird,
Under the eye: awkward, uncomfortable, strange, odd,
Under the nose: out of the ordinary.

Collarbone: But it’s not that you’re doing that on purpose, okay?
Under the arm: This is just an uncomfortable
Wrist point: thing that you’re dealing with.

Top of the head: It’s very, very hard to socialize in that moment.
You can’t properly socialize. You can do the best you can,
Beginning of the eyebrow: but you can’t focus on a conversation
Side of the eye: and actually listen to what that person is going to say.

Haven’t you noticed that? Like, you’re in the middle of a conversation, or you introduce yourself, and the person introduces themselves and instantly you’ve forgotten his or her name, or they’re telling a story,

Under the eye: and you try to pay attention, but you’ve forgotten half of the story. And you’re looking for moments like, “Oh, should I laugh here? Should I ask a question here?”

You’re constantly in your head, you’re not present in the moment – that’s what the anxiety is doing.

Collarbone: Okay. So, yes, you are behaving different, but it doesn’t make you different.
Beginning of the eyebrow: And that that’s happening is very difficult
Side of the eye: for you. But you’re making it in your head to be a lot bigger thing than it is for other people.

Under the eye: And you feeling bad about all of that…
Beginning of the eyebrow: … that’s something that you can work on.

Side of the eye: This is where you need a lot of compassion.
Under the eye: Rather than beating yourself up and
Chin: trying to be hard on yourself
Collarbone: so that somehow
Liver point: magically, next time,
Wrist point: you’re going to feel better, you’re going to do better, and you’re not going to get anxious, DOESN’T WORK.

In fact, it does the opposite.

So feeling bad about being “different” or rather behaving different doesn’t help you.

I understand that you’re dealing with these feelings, but it doesn’t help you.

Beginning of the eyebrow: So let’s do a little bit more tapping.

Side of the eye: This talk and this perspective may have hopefully helped you a bit already,
Under the eye: but let’s do a little bit of tapping and see if we can do something about that.

So just tap on the beginning of your eyebrows repeat after me out loud.

You don’t have to do anything, don’t try to force anything, just observe what’s happening.

Collarbone: I shouldn’t be different,

Under the arms: but I am.
Liver point: That’s really bad,
Wrist point: unless it isn’t.
Top of the head: I made it bad.

Notice how bad it feels.

Under your eyes: Just say I release all my emotional attachments to all the ways I feel bad about being different.
Good, stay with this. Good.

Under the nose: Just say I refuse to feel good about being different.
Chin: I can’t feel good as long as I have this problem.

Collarbone: And I should feel bad about this.

Under the arm: I should beat myself up about this.

Liver point: Beating myself up is such a confidence booster.
Wrist point: It really boosts my self-esteem.
Top of the head: If you want to feel less anxious, you really want to beat yourself up about being different.

Chin: I might behave differently,
Collarbone: but what if my behavior doesn’t define me.

Under the arms: I have this issue,
Liver point: but what if there’s more to me than this issue.

Wrist point: Even though I have this issue, even though I behave differently,
Top of the head: I choose to accept myself without judgment.

It might be what I have, but what if it doesn’t define who I am?

Now in order to feel less like a weirdo, less different, and in order to feel more like, “Okay, these feelings are common. Other people are experiencing them too and you can actually overcome them.”

And that’s going to really inspire you and help you feel you’re not so alone.

Go there now. Talk to you soon! 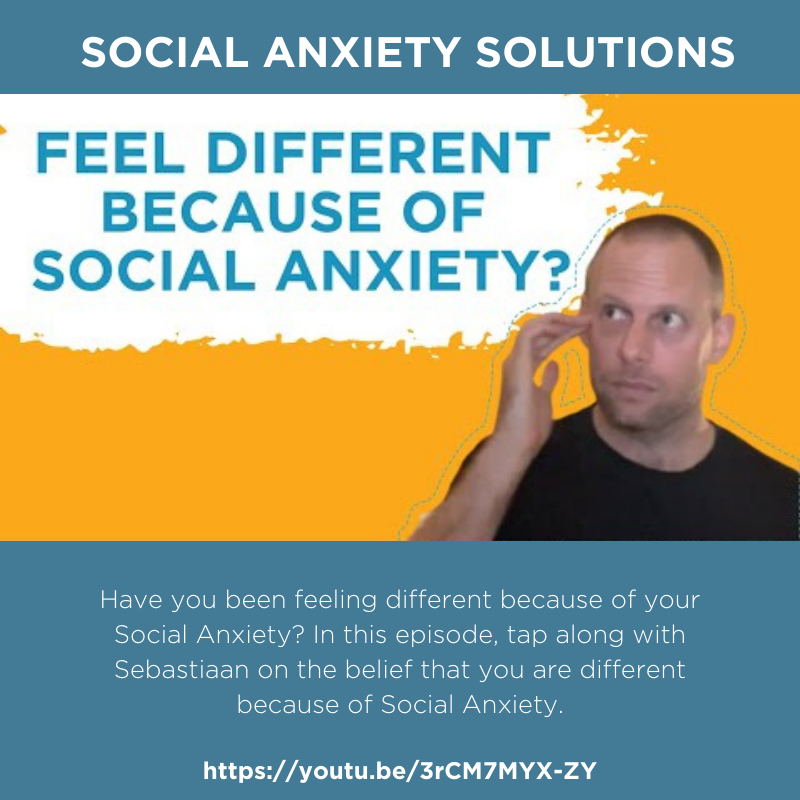 Join me
Latest posts by Sebastiaan (see all)
Previous post How to shift your limiting beliefs Next post He completely overcame his Social Anxiety
Social Anxiety Solutions © 2019 All Rights Reserved.