Why Am I Socially Awkward And How Can I Fix This?

… that myth is the thought that you can’t ever overcome your social awkwardness.

I know it can feel like a part of you when you’ve been dealing with it for so long but you aren’t born awkward.

This means it isn’t a part of who your really are. You can resolve it. 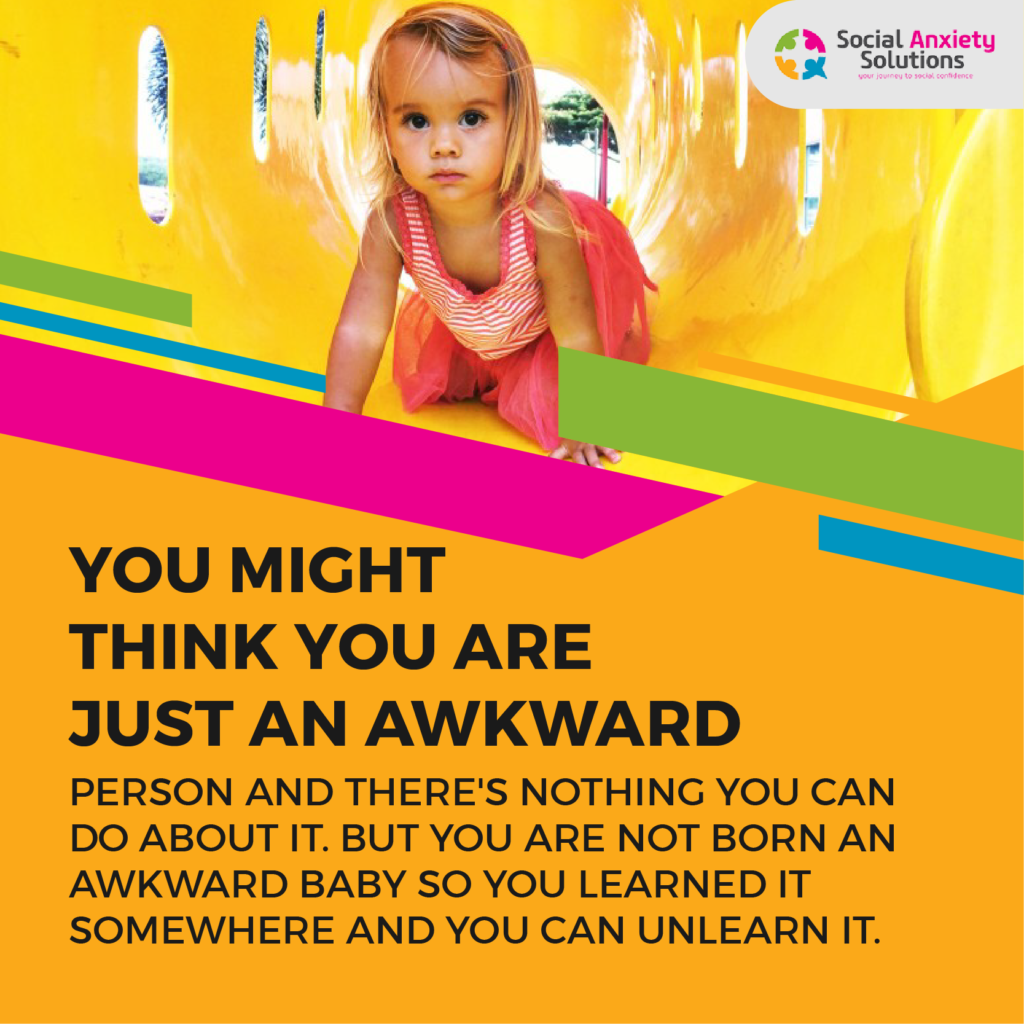 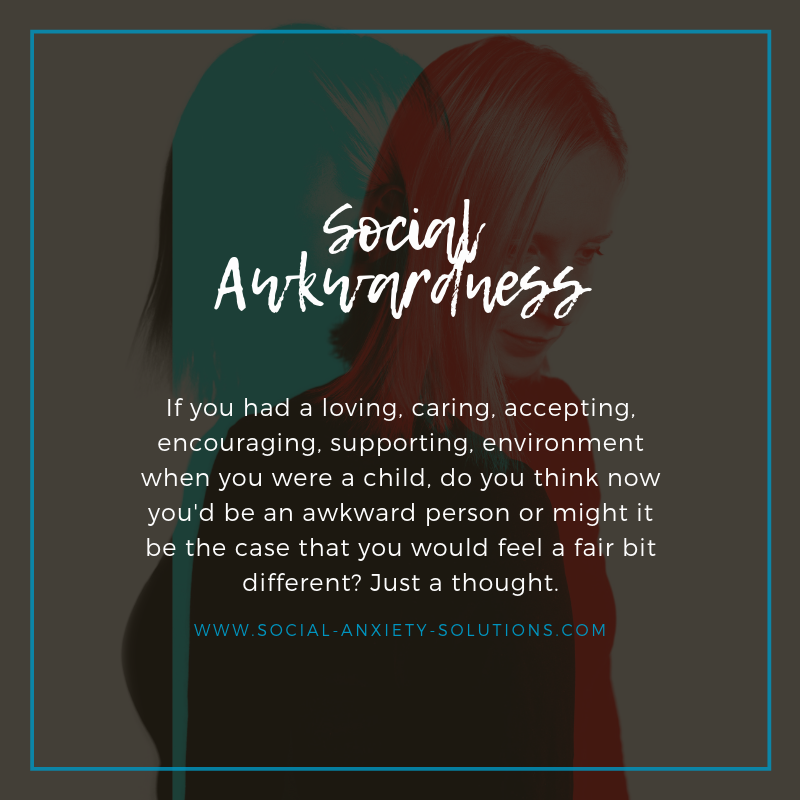 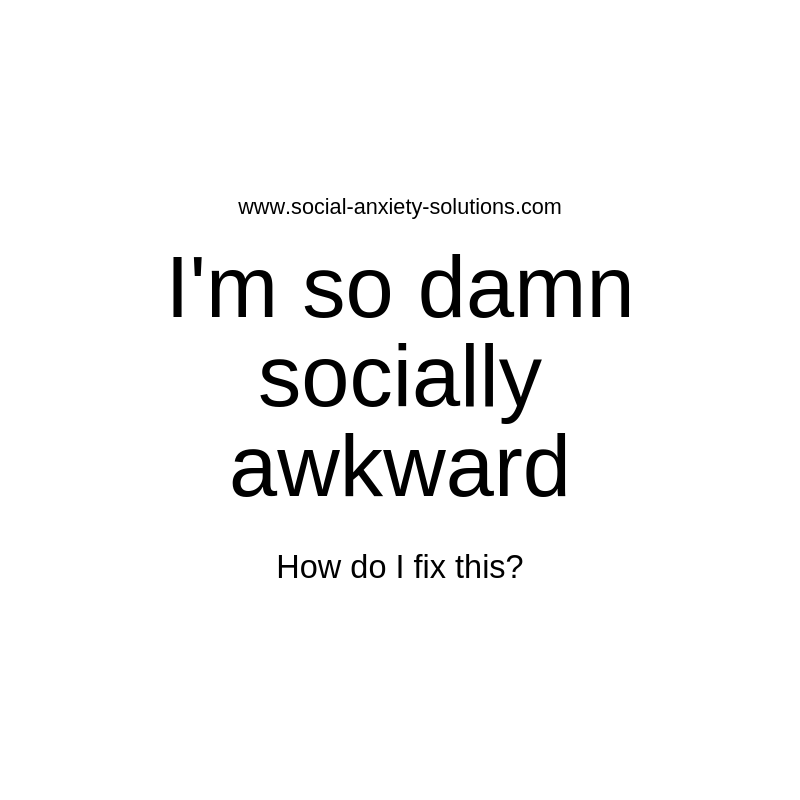 Hi, my name is Sebastiaan van der Schrier from social-anxiety-solutions.com. I’m a personal coach who overcame his own social anxiety and I’ve been coaching socially anxious clients to help them feel calm or relaxed and at ease in social situations for the past 10 years.

Today I want to uncover a particular myth or bust a belief and that belief is something that I read under one of my videos and I made a note of it to come back to it and to actually talk about it. And that was because it was quite a defeatist attitude that the person in question wrote down. What he or she wrote down was, “I am just awkward and there’s nothing I can do about it”.

Wow, man that’s that sucks to believe that because I can understand that if that’s your experience and that has been your experience for your whole life then hey, it must be that way. It only makes sense to think that way. However, if that is you if you feel that way, I just want to take you through a little thought experiment and I’ll pre phrase it.

You Are Born With Needs, Not Awkwardness

Okay, so, we have particular innate needs that we come into this world with.

To get sufficient attention, to be accepted as we are, to be appreciated and valued, to receive physical affection and healthy touching on a daily basis and to be allowed to start to become independent. Now whatever we don’t get these needs a wound is formed.

When someone has been awkward for a long time or as long as they can remember that tells me that they’re not okay with who it is that they are. So, if that’s you you’re dealing with and it’s not a judgment it’s just an observation or an analysis, I don’t know you but it’s something that I experienced myself, you’re dealing with a lack of self-acceptance. Now that has to come from somewhere.

When you’re born, you’re not awkward. You’re not born an awkward baby, alright?

Well, think about the people that are closest to you. Your caregivers, your mom, your dad maybe, your siblings, maybe a teacher, most likely it’s the parents.

Now if there’s something dysfunctional going on in the house and by the way that doesn’t have to be something massive like sexual abuse or ritual beatings or any of that stuff.

Obviously, that does have a real big effect. It can be a seemingly subtle as your parents having very high expectations of you. You never measuring up or your parents being critical or your mom being super stressed or having a different kind of family structure and feeling ashamed of that etc. It can be a whole bunch of things.

Why Am I So Awkward?

For example, if you are constantly criticized and corrected and you have to do everything right you can’t do anything wrong then you’re uh… then you start to behave, you try to get approve all the time and you need that approval, you’re desperate for that approval and you crave that acceptance that you’re not getting. That makes you incongruent with who you are. You’re then not just naturally being yourself; you’re not being but you’re behaving.

Your brain is learning okay, well, when I talk in this kind of way that I get approval and if I don’t do anything stupid and I always look proper and good and right then I won’t get rejected so I have to do this. And you start to kind of lose touch with yourself and that that’s awkward.

Now let me take you through this little thought exercise.

Imagine if you grew up and, in your family, instead of what actually happened you got plenty of positive attention and it was good attention. You were also accepted exactly as you were. They liked you just for you. You didn’t have to change, you didn’t have to be different, they just liked everything about you. Then they appreciated who you are and they valued you.

When you wanted to say something they would listen, they would carefully pay attention to you, what you said is important, you were respected, you had physical affection, there was hugging, there was warmth, there was connection, your parents were there for there for you, you were supported and you were allowed to become independent.

So, when you wanted to do things instead of your mom and your dad quickly doing it for you, you were encouraged to do it yourself and then you were praised when you were doing these things and so you built confidence and so on.

If that had been your experience, so you had a loving, caring, accepting, encouraging, supporting, environment, so you really think that now you’d be an awkward person or might it be the case that you now would feel a fair bit different? Just a thought.

All right, I’ll leave you with that thought. And of course, there are other things that it kind of caused or contributed, it’s not always your parents, maybe you have the bullying experiences or whatever but usually it’s the parents. Hopefully this thought exercise is helpful for you.

And the cool thing is the awkwardness if you’re dealing with that, it can actually be undone.

The emotions, the stuck emotions and the beliefs, beliefs about yourself, “I’m unlikeable, something is wrong with me, people don’t like me, I’m awkward, I’m a loser” those beliefs which have just emotionalized thoughts and these stuck emotions, the old unprocessed emotions they are responsible for the awkwardness.

A really effective way of doing that is using a technique called tapping or EFT.  There are variety of other techniques but I found this to be very effective. I talked about this technique in many of my videos and I’ve used that along with a bunch of other techniques and the help of some Brewin therapists but that technique is really amazing in order to release stuck emotions, clear these limiting beliefs and get rid of the stuff that causes you to feel awkward.

Okay, so, what happened, happened but you don’t have to be a victim to what happened. You can actually take control because you’re responsible now to deal with the stuff that you’re dealing with and EFT is your magical tool in that. So, it’s a psychological form of acupuncture. It looks really weird and silly, you tap on your face and body and you probably think I’m nuts but it is amazing, it is really, really amazing and life-changing once you know how to apply it in the right way.

If you want a little taster of that I have a free social confidence starter kit where I teach this technique that I’ve used to overcome my own social anxiety, the tapping thing. I teach the bare basics of it so that you can get going and I also guide you through a couple of experiences in four or five videos where you use the tapping and actually release some of these awkward emotions, awkward feelings or emotions that cost or contribute to the awkwardness. You actually feel a shift in your body which is quite amazing. So, you can get that below this video or click on the link that gets to the webpage and there you can sign up to get that free starter kit.

All right, I hope it has been helpful. Leave your comments if you have one. I release video like this every Thursday. Subscribe here so you get them on time and thank you. I hope this was helpful. Bye for now.

Join me
Latest posts by Sebastiaan (see all)
Previous post The Secret to 100% Self-Worth Next post She Resolved 90% of a Social Anxiety Issue
Social Anxiety Solutions © 2019 All Rights Reserved.