The Latest Science About EFT

“Can you give an in-depth explanation about the science behind #EFT?”

“What triggers the brain and how does EFT release #emotions out of our body?”

These are the questions that I am going to answer in this episode.

PS: Do you also want to overcome your Social Anxiety using EFT Tapping? 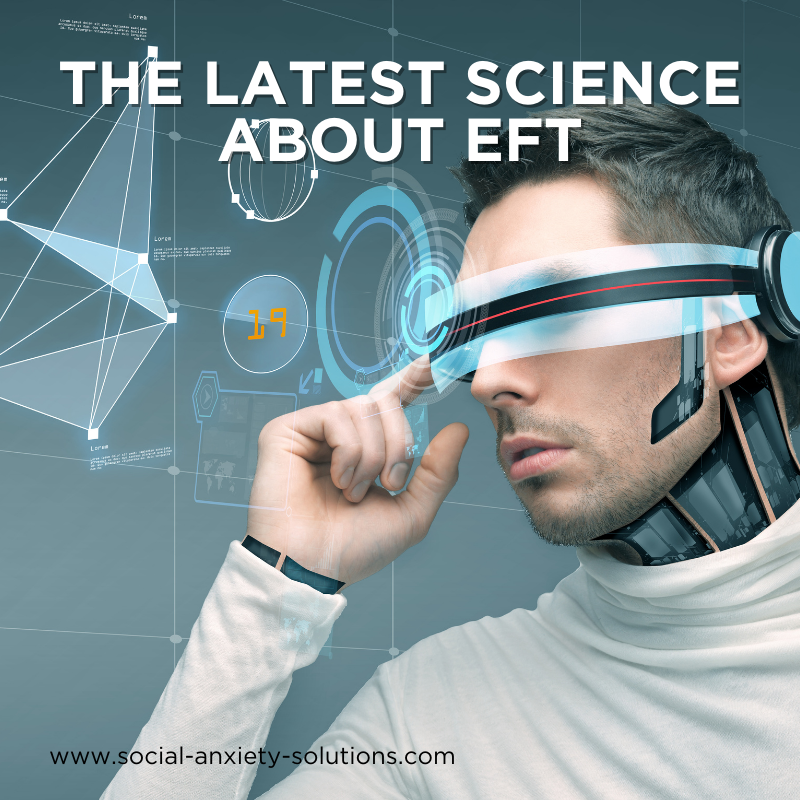 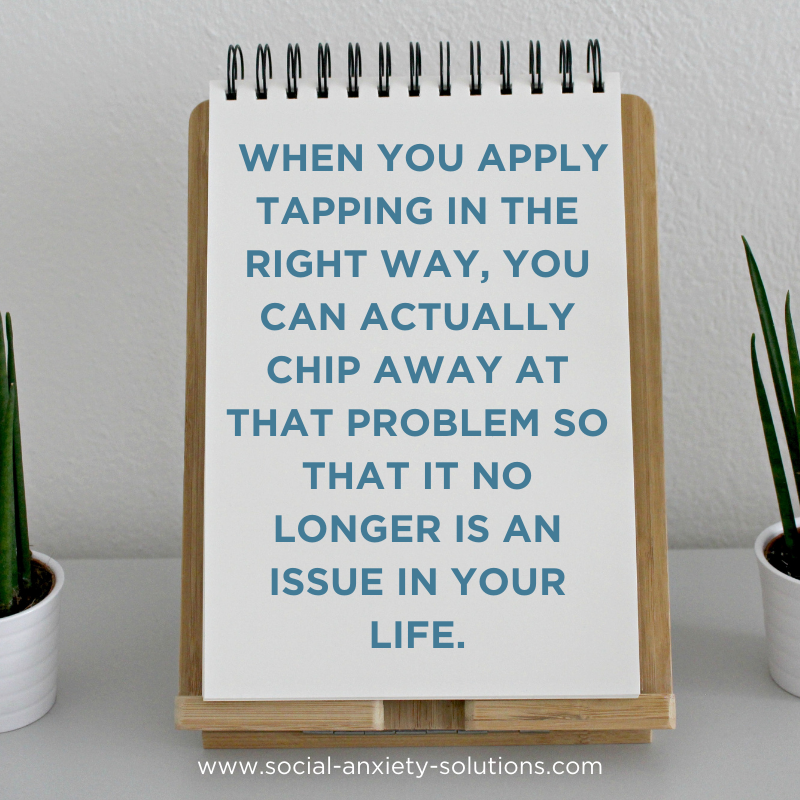 Now I often talk about how there are 102 studies backing up EFT’s effectiveness and how EFT meets the criteria of evidence-based treatments set by the APA – American Psychological Association for a number of conditions including public speaking, test anxiety, and PTSD – Post Traumatic Stress Disorder, one of the most severe anxiety disorders.

And how studies at Harvard Medical School have demonstrated that the tapping of these acupressure points significantly reduces activity in the key part of your brain that produces anxiety called the amygdala.

Or how other scientific studies have shown that the tapping sends a little signal to party a brain called the amygdala, which reduces cortisol levels and increases serotonin levels.

And that these biological responses create a sense of calm.

And these are all little interesting facts.

However, it’s far more interesting when you see what the real science is behind it, and how that compares to the amount of science that’s been done on other psychology modalities or other psychology techniques.

And for that, I’m going to replay a video, part of the video that I created earlier that I put a lot of work into.

And I think that’s going to be really, really helpful for you.

So, I’m playing it for you, right now.

Now to demonstrate how significant this amount of research is. Let’s look here at this pyramid-shaped diagram that demonstrates the hierarchy of scientific evidence.

And I have to thank my colleague, Steve Wells for this, who’s a psychologist and a leader in the field of Energy Psychology because I got from him.

This triangle-shaped diagram is divided up into six different levels.

At the bottom is the weakest level of evidence.

And at the top is the strongest scientific evidence.

Now, the bottom level is colored blue, as you can see, and reads ‘anecdotal reports’. That is like “Hey, my friend tried this, and he got a great result, you should try it too”. It’s very weak evidence.

The next level up is purple and reads ‘systematic observation’. This is a lot better, but not strong either.

Above that, you see ‘case studies’ in red. Again, this is stronger evidence. But here, it’s just individuals.

The next level up from that is orange and reads ‘uncontrolled outcome studies’. Now here, you measure groups BEFORE and AFTER treatment. And you can see, okay, they had this problem before, we applied this treatment, and now they have improved this much, or they don’t have the problem anymore, which is, again, stronger evidence.

But here, the challenge is that there’s no control group to compare the results with. So, while you can say, “Hey, this group had this problem, we did this, and now they’re all better”. People can still say, “Well, if you would have taken another group of people, they might have gotten better anyway without your treatment”.

So, to really make it clear that something is effective, you need to have a control group.

This brings us to the second-highest level in the pyramid of scientific evidence.

It reads ‘randomized control trials’, and is colored gold. It’s gold because it’s considered the gold standard in clinical research to measure the effectiveness of a new intervention or treatment.

Now in a randomized control trial, you randomly assign participants to two groups: an experimental group, let’s say Group A, and a control group, group B, and you compare the outcomes against each other after treatment.

Let’s look at an example of one randomized control study in 2016. Here to study tested the effects of EFT tapping on PTSD – Post Traumatic Stress Disorder in war veterans.

PTSD is one of the most severe anxiety disorders and it’s a common condition under war veterans, and it is often regarded as treatment-resistant.

And this study recruited 58 veterans who scored 50 or greater on the military PTSD checklist, the PCLM, which indicates clinical symptom levels.

26 of them were randomized into a control group called the “treatment as usual” (TAU) waitlist group, and the other 32 were put in an experimental group.

Those in the experimental group received 6 one-hour EFT sessions in addition to TAU – treatment as usual.

Now after the treatment, the EFT group demonstrated a significant reduction in PTSD symptoms.

The mean score of participants on the PTSD test before treatment was 66. And after the treatment, the mean score was only 34 (By the way to mean scores like the average), and subjects in the TAU – treatment as usual group showed no significant change.

By the way, it gets even better. Not only did the veterans keep their improvements at three and six-month follow-up. Also, psychological conditions such as anxiety and depression had declined significantly, as are the physiological markers of insomnia and pain.

95% of the veterans who completed the study no longer scored more than 50 on the military PTSD test, with a mean score of 34. They no longer had clinical PTSD.

Now, this is one example of a randomized control trial and it is considered very strong scientific evidence.

Now there’s one level above, the top of the pyramid and this is the highest level it is green, and it reads ‘meta-analyses’. These can only be done when you have enough randomized control trials.

Now a meta-analysis is regarded as the highest quality, strongest evidence of science.

Only 10% of psychology has even one meta-analysis done; tapping has had five meta-analyses done on it.

Here you see three conclusions of meta-analysis that were done that you’d likely find relevant because they showed that tapping has had a large treatment effect for anxiety, depression, and PTSD.

If you’re listening to this on the podcast, rather than watching this, I’m going to explain it to you so you can hear it as well.

If you’re listening to this on the podcast, you can go to my channel and find the video where I will reference the places where you can find scientific evidence.

Now, this is really strong evidence of the power of tapping.

This meta-analysis that I showed you is really the highest level of scientific evidence, and you need a certain amount of studies of a certain quality in order to be able to do them.

And as you can see, all of them had a large effect size.

In fact, the effect sizes for tapping were all very, very large.

So, I hope this gets you excited.

Share this video with other people who can benefit from it, share the good news. It’s amazing what can happen these days.

When you apply tapping, you focusing on overcoming your social anxiety.

It’s not going to happen in a day.

It’s not going to happen in a couple of weeks.

But you can make significant progress within just a few weeks.

By persistently applying this technique to all of the aspects that make up your social anxiety problem.

You can get to a place where there’s none of it.

I have no anxiety, I feel at ease in social situations.

And it is a beautiful journey, the journey to social ease, and you can get on it.

Start learning more about this and even better yet start applying it, go to my website social-anxiety-solutions.com where you can learn for free by signing up for the starter kit, the social confidence starter kit where I teach you some of the basics of tapping, and how to apply it to social anxiety specifically, because that’s what I’ve specialized in.

Get started on your journey to social confidence.

All right, this Sebastiaan signing off.

Thank you for your question, and I’ll connect with you very soon. 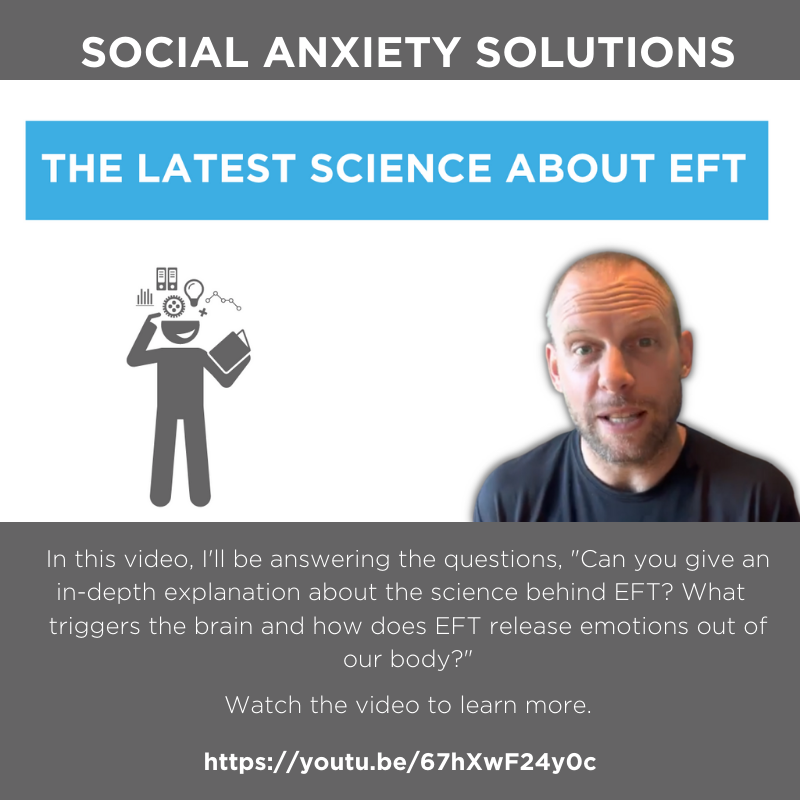 Join me
Latest posts by Sebastiaan (see all)
Previous post If I skip tapping on certain pressure points, is it still going to be effective? Next post 3 Tips To Get The Most Out Of Your Therapy
Social Anxiety Solutions © 2019 All Rights Reserved.