If I skip tapping on certain pressure points, is it still going to be effective?

Got any questions about tapping?

In this video, I’ll be answering the question:

“If I skip tapping on certain pressure points, is it still going to be effective?”

If you want to start learning more about tapping, you can go to my website and register for my FREE Starter Kit. 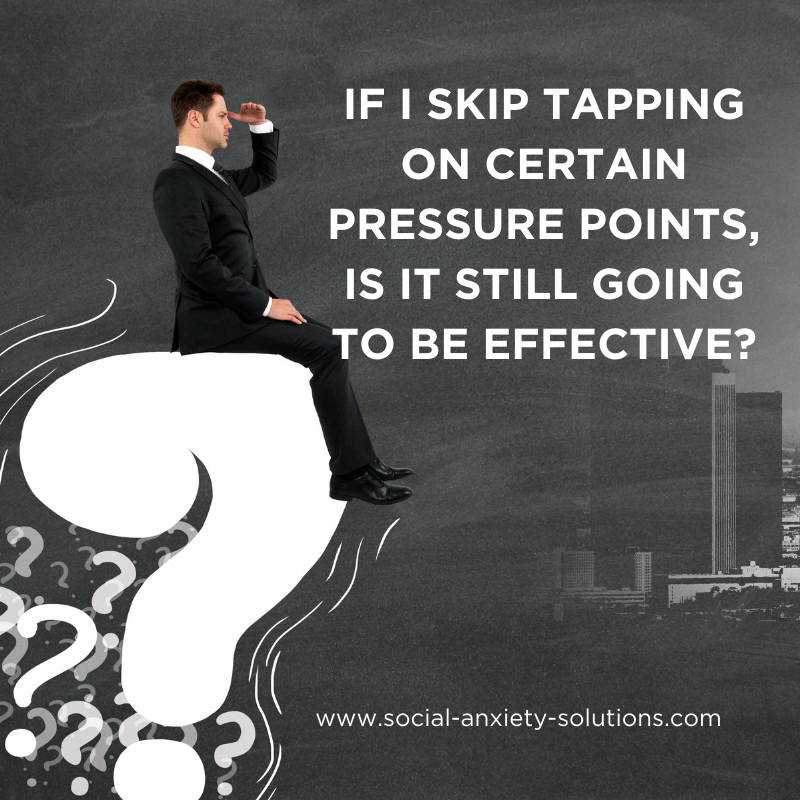 A question about tapping is what I’m going to answer right now.

My name is Sebastiaan. I suffered from a whole bunch of Social Anxiety, which sucked for a long time. And then, I discovered some technique called tapping, EFT – Emotional Freedom Techniques. I used that to overcome my social anxiety.

This is a long time ago.

Since then, I’ve been helping people using this technique to overcome their social anxiety.

And I’m on this mission to update social anxiety treatment worldwide because just Cognitive approaches are just a small part of the puzzle.

Because overcoming social anxiety is mostly an emotional journey.

Of this tapping technique, how do you do it?

Or rather, the question is, and I’ll read it out.

Hello! Yes! Actually, I have a question. I’m wondering if it’s sufficient to tap on the middle of the eyebrows…

I think he or she means [here] in between the eyebrows so that you cover both points because it’s actually on each side of the body. And it’s right there. So, he talks about tapping like that.

Which is not the chin. They call it chin point, but it’s the bottom lip – the indent here.

So, if you tap on those points, he says:

…and you skip the other pressure points, is that still okay?

And the answer is:

Now, there are more points:

It’s okay to do that.

Right. I hope it was helpful.

And I’ll just give you a little quick bit of background.

So, EFT – Emotional Freedom Techniques had a forerunner, and that was Thought Field Therapy.

Roger Callahan developed Thought Field Therapy, and he was a psychologist/psychotherapist.

And he discovered after studying Chinese medicine that certain points on the body were connected to certain organs.

And he noticed that emotions and feelings are connected to these particular organs.

He had a client who had a significant water phobia. And he tried all of the techniques. And it didn’t do much for her at all.

And eventually, in his experimenting with this lady. “well just tap onto your eye, while you think of water and notice what happens.”

And that fear sensation for her while tapping on the eye started to decrease rapidly. And she’s like, “Oh, my God, it’s gone.”

Like a one-minute miracle, the ones that you might have heard about that almost never actually happened.

And then he was like, ‘Oh, wow. So, these tapping points are connected to particular feelings in the body. And when we tap them, you’re going to release the emotions and the feelings associated with what it is that you’re thinking about, and it’s going to be released in the body.’

But this lady then cured her lifelong water phobia.

But she was not afraid of the water anymore.

And so, then he was like, ‘Wow, this is amazing. Let me experiment with this.’

And he then came up with all sorts of algorithms for particular issues.

Okay, you have low self-esteem, tap on the side of the eyes, under the eyes, collarbone on top of the head under the arm.

I’m just making this up as we go. This is not the actual algorithm.

But that’s how TFT was put together.

And so, there were particular algorithms for particular problems. And he then started offering these workshops for $10,000 per workshop.

And then Gary Craig comes along, a Stanford engineer, and his mind is thinking very strategically. He sees that there’s this algorithm, you need to do this for that, and that for that, and this for the other, and he’s like, wow, that’s very complex, how can we simplify it and apply it to more people?

And then, he created a standard algorithm for all issues, and that became standard EFT.

And it’s like, in the karate chop, even though I have this problem, fill in the problem. I deeply completely accept myself—a setup statement.

And then I think the original tapping points are the beginning of the eyebrow side of the eyes, under the eyes on the nose, under the chin, and the collarbone on the arm. And maybe top of the head.

I’m not even sure if that was part of it. It’s been a long time that I studied that. And that’s the general algorithm.

And many variations have come from that sense. But the tapping points are generally still the same. My mentor, and his best mate, psychologists, and a psychotherapist they’ve experimented with it a lot.

And they’ve told me, and this is also my experience after experimenting with a lot, that if you tap on five or six points in succession, you’re also going to get a result so you can choose which ones.

For best results, tap on all the points that I tap on those I tap on.

Right hope this is helpful, and I’ll connect with you very soon.

If you have a question, leave it underneath this video, or send it over to socialanxietysolutionsva@gmail.com. 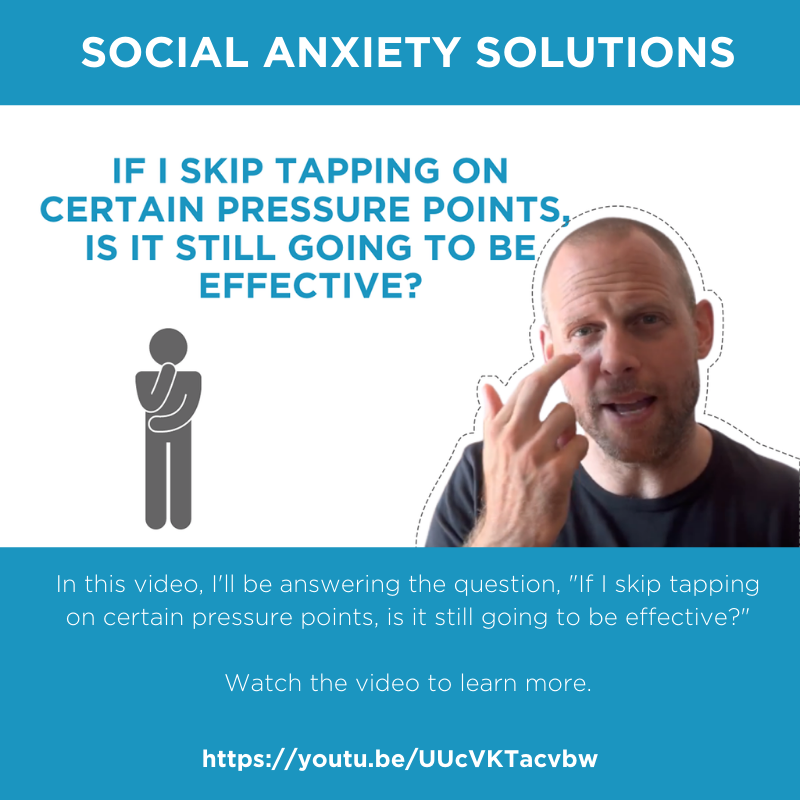 Join me
Latest posts by Sebastiaan (see all)
Previous post “Sometimes I feel like giving up…” Next post The Latest Science About EFT
Social Anxiety Solutions © 2019 All Rights Reserved.