Feeling demotivated in overcoming your SA? Hear this out!

Do you need some motivation in overcoming your social anxiety?

Do you feel like overcoming your social anxiety is taking forever?

In this episode, Sebastiaan talks about how learning a new skill is very similar to overcoming social anxiety.

He shares some fresh perspectives when you’re struggling with motivation to change.

He speaks of what you should focus on to get better and to keep moving forward towards your goal of social ease and social confidence.

Watch the video and learn how you can maintain your motivation on your #JourneyToSocialConfidence.

Be guided on how to start chipping away your social anxiety problem.

Get my FREE Social Confidence Starter Kit by going to https://bit.ly/socialconfidencenow 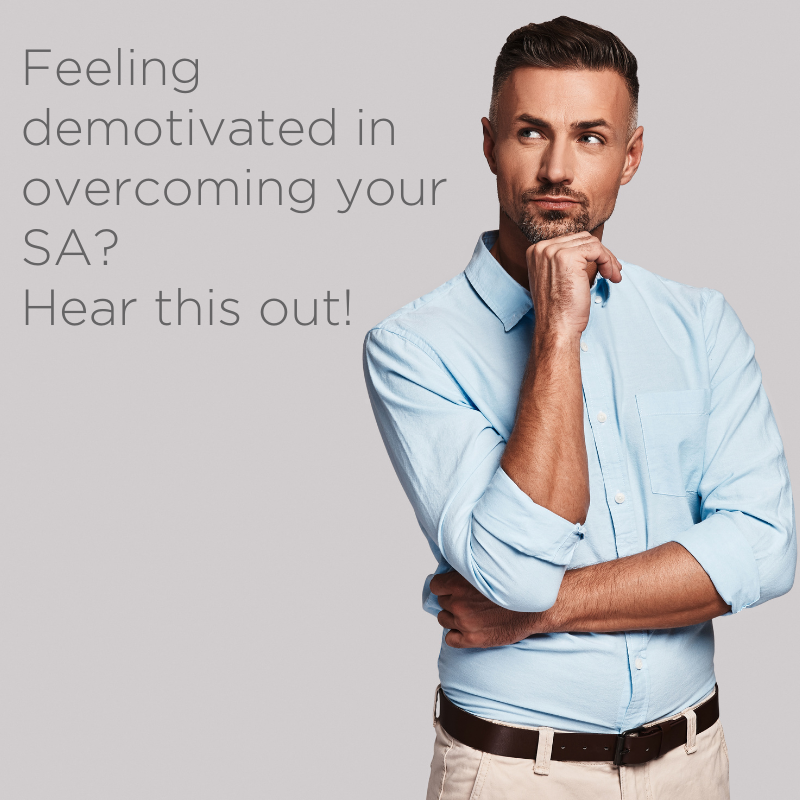 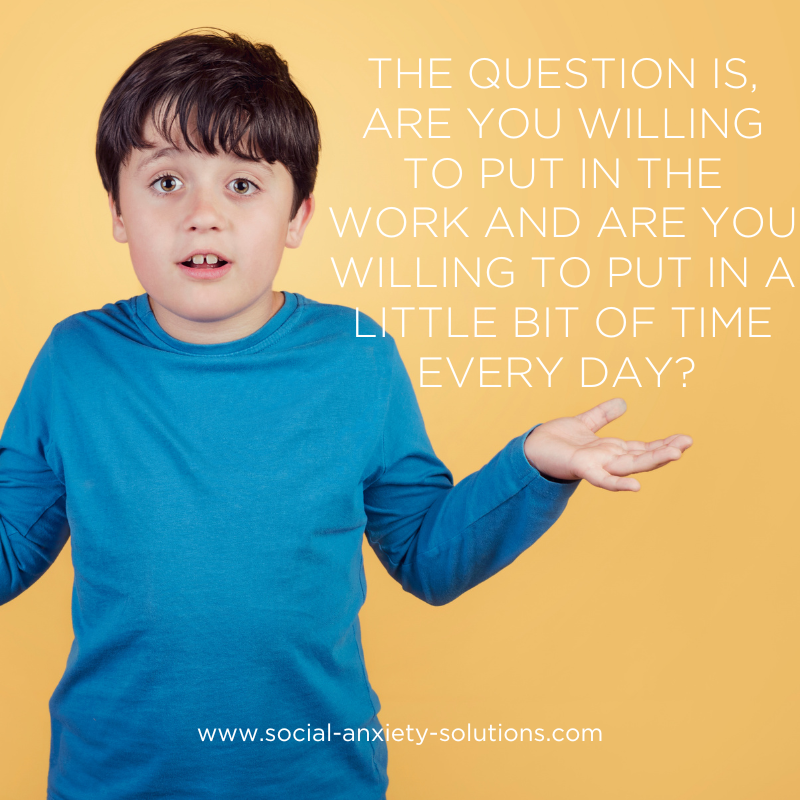 Here’s some motivation to overcome your social anxiety.

So, I’ve been thinking about this for a while.

I overcame my social anxiety.

I’ve been coaching people to overcome their social anxiety.

And I’ve also learned a couple of new skills in my life.

One of them is [learning] salsa dancing which I started 3.5 years ago.

And [the] another skill that I’m currently learning is speaking Spanish, for the past threee months.

[That is] because I wanted to be able to speak [Spanish] when I [will be] in Colombia.

I’m in Colombia right now. It’s such a joy to be able to communicate with [its] people.

What a world is opening up compared to my previous two times where all I could say was “Cómo estás” [which means] “how’s it going?”.

So now, we can actually have somewhat of a conversation.

Now, I stumble over my words and need to think about it for long and can only pick up about 70% of what they’re saying, and all of that. But still, it’s fun. It’s exciting.

[The] same thing for salsa – [it] was difficult in the beginning [and it was] challenging. [You] looked like a dumb ass [and] all sorts of uncomfortable feelings and emotions, and so on.

But I also knew, “well, I’m going to get better at this as I learn more [and] as I continue”.

And it’s the same (or it’s very similar at least) in applying the tapping to overcome your social anxiety.

So that’s a journey as well.

So it’s a journey for me to become fluent in speaking Spanish.

It’s a journey to get good and enjoy myself and be in the moment be able to translate the music that I hear into my dance with my partner.

And so there are a lot of commonalities within each.

And one thing I heard in language learning community was like it takes 150 hours to become conversationally fluent.

But that’s [only about becoming] conversationally fluent. I’m not there yet but I’m slowly getting there (you know? I might be a bit slow – who knows?)

But I found that to be very motivating. Like, “wow! Just under 50 hours! Guess what? I’m going to increase my hour a day that I had been doing to two hours a day because then I’m going to get there faster”.

That idea is based upon a lot of experience from lots of different people.

Therefore, people can say, “well, on average [it] takes about 150 hours for a lot of people.” That’s a number that’s been thrown around a lot.

In salsa, there is no such number. They say, “well, you can be pretty good in three years”. I’ve heard that, or I’ve heard like, “well, the first six months suck”. They call it the ‘salsa hell’.

But there’s no real particular defined [duration about] how long it’s going take.

But what I do know is that, when I put in the effort, and I practice, and I continuously improve, and I get supervision [like] a private class, or a group class, or feedback from my partner, then, I am getting better. So, [I am] constantly getting better.

So rather than [me focusing to the] “ultimate outcome”, (because there is none, unfortunately, or maybe fortunately, who knows?) [and thinking] “I’m not going to be the best dancer in the world [because] that’s just not going to happen”.

So [now], I [have] more personal goal – [that] I continuously want to keep improving and keep getting better, and keep enjoying it more, and evolve and so on and so forth. To be better able to interpret it.

I’ve got many, many goals, but there’s no end goal.

And so, what I recommend that you do is you have an attitude of making progress in this area.

Now of course, it’s easier said than done because these things that I’m doing right now [like learning] salsa [and learning] Spanish – [is something that] I’m not moving away from a massive pain. Right?

So, I’m pleasure-oriented (for the most part). There [are] some pain involved like I [have] to sit down and study, I [have to go] through uncomfortable movements and I [have] to look like a dumbass sometimes [for] a little bit when I practice new things, and so [on].

But that’s insignificant – hardly mentionable compared to the pain that you’re dealing with when you’re overcoming social anxiety.

But there’s also [a] pleasure that you’re moving towards, like, – “oh! I’m going to be able to be at ease being myself”, “I’m going to have conversations and not worry about: ‘ugh…how am I going to come across?’ and ‘[am I] going to embarrass myself?’, ‘what does he/she you’re going to think of me?, [and] ‘how are they going to like me?’

[It will be like] “I am actually going to connect [with] people and we are going to have a good time”, and “I look forward to socializing”.

So, there is also forward motivation and inspiration that [will] pull you – so you’ve got both.

But it’s a journey to go from social anxiety to social ease.

And there’s a certain amount of hours that it takes to get there for you.

So if you just do 15 minutes a day, that’s going to make a big difference.

And what I’m not saying, by the way, “do three hours of tapping a day”. No, there’s such a thing as overdoing it.

But basically, there’s a set amount of little steps that is required in order to go from social anxiety to social ease.

It’s little tweaks in your psychology [like] letting go through particular memory, neutralizing the emotions from it, updating a particular belief, letting go of your emotional attachments to it, seeing something from a different perspective, letting go over particular imagined downsides to social ease, overcoming a perception that there’s an upside to holding on to the problem, trying out a particular situation where you used to be anxious in and finding out that you’re no longer anxious there, or discovering that there’s still a particular part that triggers you.

And then moving beyond that.

The only thing is, it’s uncertain, it’s unclear how many steps it is, but each step that you take that you one step closer.

And rather than being focused on the ultimate outcome of social ease so “I can be totally myself [with] all people, all the time” and “everything is great”…

It’s all great that you’re moving in that direction.

But rather focus on the journey and on the progress that you’re making… celebrate that progress and simply put into work every day.

And it’s not hard. It’s sitting down to do a bit of tapping.

What makes it hard is [the] resistance to change.

So if you notice that you don’t want to do your tapping for that day, that [is something you] should be [focusing] to tap on.

Do that – just that what I just did, and see what happens after that.

But put in the work.

And see [that] this is something that is going to get better over time because it [only] requires your effort, your energy, and a period of time.

And sometimes, you need help- you need outside assistance.

And [sometimes], [there are] certain ways of tapping [that] is more effective than others.

But that’s that’s not the point of this video.

[The] point of this video is that, you’ll get rewards for sustained effort and efficient action towards a particular goal.

Alright [I] hope [this] is helpful.

If you have [any] questions, let me know.

Have a good one.

Talk to you soon, bye! 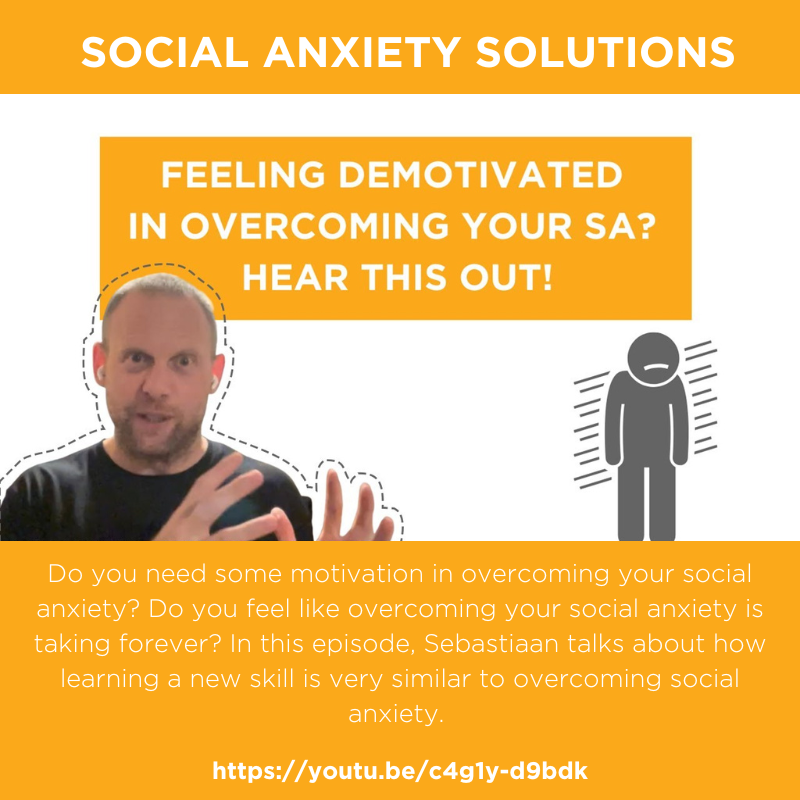 Join me
Latest posts by Sebastiaan (see all)
Previous post “Is my insomnia related to my Social Anxiety?” Next post Do I Need To Get Diagnosed By A Therapist For Social Anxiety?
Social Anxiety Solutions © 2019 All Rights Reserved.